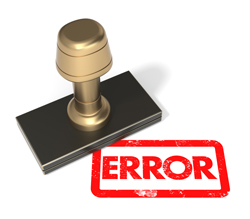 Courses on medical errors were conceived to protect patients. For that reason, they talk exclusively about preventing the kind of errors that can reach the patient. This is typical of most organizations as they envision the customer as only the end-product user. But medical errors are only a fraction of the total number of operational errors. The largest number of those errors do not reach the patient, but hinder productivity to a great extent. Eliminating errors will improve productivity, quality and timeliness and save time and cost.

Like any sensible theory, Lean management puts the customer first, but it defines “customer” in a process-oriented fashion. Just as W. Edwards Deming has suggested: any succeeding person, process, workstation or department who will use the results of your work is your customer. If you are to utilize the results of your work at a later date, you become your own custom. In a lean office, everyone is at once the customer of the previous operation and the supplier to the next operation.

To make this concept function properly, all parts of a practice communicate freely. They share problems and work together to avoid passing errors to the next operation. Together, they build preventive systems to avoid error recurrence. This all-hands-on-deck attitude is what makes people the “most valuable asset” in a lean practice.

What is considered a mistake?
Any plan or action that does not conform to a standard – whether externally or internally imposed – is a mistake. External standards are often dictated by the different organizations that regulate the practice of dentistry. Internal standards are created by the team to ensure the proper execution of treatment.

The way we write our patient notes is a good example of an internally created standard. We divide our notes in three sections. In the first line we summarize what needs will be walk out – Crown, buildup, root canal, prophy, etc. This line allows other members to help in the walk out if needed, and at a later date, allows to review what was done during that appointment without having to read the entire note. The next paragraph details what has been done following the SOAP (Subjective, Objective, Assessment, and Plan) protocol. The last line indicates the plans for the next regular visit and the next hygiene visit. Any notes that do not follow that standard are considered mistakes.

Theories of mistakes
When it comes to preventing mistakes, our actions depend on the concepts that fuel our thinking. I found Sidney Dekker’s book: Safety differently, particularly informative in summarizing the history of safety and error proofing. In what follows, I mention Dekker’s historical recount, and I add some other theories that were instrumental in improving mistake proofing.

Theory 1: People are careless
At the beginning of the 20th century, Dr. Philip E. Vernon, a psychologist at Oxford University, was a leading researcher on human behavior. He was cited by Dekker as writing that: “Accidents depend, in the main, on the carelessness and lack of attention of the operator.”

Theory 3: Accident-proneness
Also known as clumsiness, this is the conception that some people might be more likely to create errors than others. This theory is based on studies conducted around 1919 showing that a relatively small proportion of workers accounts for most of the accidents.

Theory 4: The “Swiss Cheese” model, introduced by James Reason in 1990
I became interested in this theory because it is mentioned very frequently. The operational system is represented having successive defense barriers to mistakes. Each barrier contains weaknesses represented by a hole, like in a slice of Swiss cheese. If all the weaknesses line up, a mistake can go unnoticed and an accident could happen.

Theory 5: Errors are caused by the system, not the worker
Pioneered by Dr. W. Edward Deming in the late 1940s, he advocates reducing errors through “Statistical Process Control.” Deming is the father of Total Quality Management that led to the modern management system called Six Sigma.

Theory 6: 100 percent inspection and collaboration with everyone on the team, introduced by Shigeo Shingo in the 1950s
Shingo is the only author I have encountered since 1980 who claims attaining Zero defects. In his book “Zero quality control: Source inspection and the Poka-yoke system,” he relates six months of zero defects passed between employees (not only in the final products) in a washing machine assembly line employing 23 workers and handling 30,000 units per month.
“This significant goal has been attained by the use of source inspections, self-checks, and successive checks, and by the installation of effective poka-yoke devices.”
In response to making the worker responsible for mistakes, Shingo wrote the following: “Whenever I hear supervisors warning workers to pay more attention or to be sure not to forget anything, I cannot help thinking that the workers are being asked to carry out operations as if they possessed divine infallibility. Rather than that approach, we should recognize that people are, after all, only human and as such, they will, on rare occasions, inadvertently forget things. It is more effective to incorporate a checklist — i.e., a poka-yoke — into the operation so that if a worker forgets something, the device will signal that fact, thereby preventing defects from occurring.

Because Shingo’s results were unprecedented, and because he has offered thorough practical advice, we have adopted his methods to eliminate defects as a means to reduce cost and improve productivity.

The lean way to improve productivity by eliminating defects
Before W. Edwards Deming, Taiichi Ohno and Shigeo Shingo, the theories aimed at eliminating errors viewed workers as the source of the problem. Experts who don’t know the work very well but know management and process control dictated the rules of work and process sequence to a worker who knew the job better, but lacked management and process control knowledge. Lean looks at the situation from an opposite direction. It sees the employee as part of the solution, not the problem.

When it comes to error proofing, different authors have presented different definitions. To stay true to Shingo’s writings, I will adopt his own definitions as he writes: “…The occurrence of defects is the result of some condition or action, and … it would be possible to eliminate defects entirely by pursuing the cause. The causes of defects lie in worker errors, and defects are the results of neglecting those errors, it follows that mistakes will not turn into defects if worker errors are discovered and eliminated beforehand.”

As we can understand from this statement, any error that did not enter the system yet he called a mistake. If that mistake enters the system, it becomes a defect. We can erect checkpoints to find mistakes as soon as they happen, and barriers to prevent them from entering the system as soon as we discover them. This methodology has allowed Shingo to accomplish what was considered impossible before him, zero defects.

Many points are noticeable in this approach. Unlike previous physiological and psychological studies that aim at understanding how and why humans produce errors, Shingo embraced the fact that human errors are inevitable, and created devices that prevented mistakes from entering the system; as a consequence, they could not become defects. Think of it as child proofing your house. You know that your toddler is going to stick his finger in that electric socket. You don’t take a chance by convincing him to avoid the socket, you just child-proof it.

But there is a difference here; workers are not children. They usually know what to mistake-proof and how. Shingo, Ohno and Deming, like other managers who learned from the experiences of World War II, knew that cooperating with those doing the work was the best way not only to reduce defects, but also to improve every aspect of operations.

As Shingo created his mistake-proofing (Poka-yoke) devices, he understood that even a 100-percent inspection does not eliminate defects, it can only alert us when they take place. To reduce defects, we need to build quickly reactive systems that create barriers to defects. That should become our goal.

Ways to prevent recurrence of defects
In his book “Lean hospitals: Improving quality, patient safety and employee satisfaction,” Mark Graban summarized the categories of error prevention in a very clear way. I will describe the most effective first.

The information on a checklist can be placed in the environment or on the product itself. That would give even better reminders than the checklist itself.

Self-checks are helpful in identifying mistakes. One needs to just verify his own work before passing it to the next person. If aided with instruments to verify the work is correct, self-checks yield very good results. But without instruments, a person tends to miss the same mistake every time she checks the work.

Improving the process
Before World War II, research focused on human physiology and psychology to find the source of mistakes. Then it evolved to think that some people were prone to accidents and mistakes. With the advent of “scientific management, managers started looking for the “one best way” to perform any task. They thought that if employees conformed to that “one best way” no mistakes would happen. They were disappointed because compliance alone was not enough. The systems themselves contained flaws that generate defects.

During World War II, the new machinery became complex, and the distance between managers and workers widened. Looking at the physiology and psychology of the individual worker was not enough anymore, and relying on supervisors to dictate standards was not enough either. New philosophies to eliminate and prevent defects have emerged. They rely on the collaboration between supervisors and employees to keep tweaking the work design indefinitely until defects are totally removed.